My research interests lie in the modelling of the complex interactions between coherent nonlinear structures and turbulent fluctuations in turbulent fluid flows. This involves the understanding of both vortex dynamics, nonlinear wave interactions, and stochastic fluctuations. I predominately deal with turbulent flows in two-dimensional and geophysical fluid dynamics (atmospheres and oceans), quantum fluids such as those appearing as Bose-Einstein Condensates (BECs) or superfluid helium, and fluid analogies in nonlinear optics and cosmology.

Below is a selection of funding opportunities and current research projects that any potential PhD student or postdoctoral researcher who is interested in working under my supervision can apply for or freely discuss with me.

Two-Dimensional and Geophysical Turbulence
Many geophysical flows are quasi two-dimensional in nature, where the flow is restricted in one dimension by either rotation, stratification, or due to physical confinement. At the most basic level they geophysical flows be modelled by two-dimensional fluid equations such as the two-dimensional Navier-Stokes or quasi-geostrophic equations. In regimes of small-scale pumping and weak dissipation, these systems display a flow of energy towards the largest scales, leading to a phenomenon called energy condensation at the scale of the system. This pile up of energy can induce the self-organization of the fluid flow into large-scale coherent structures that exist on top of a random turbulent background. For geophysical flows, these coherent structures usually take the form of system-sized vortices or zonal jets (think of hurricanes or large-scale ocean jets such as the Gulf Stream). Questions of universality of these structures are the most natural questions to ask for mathematicians. My interests relate to developing a statistical theory for modelling the complex interactions between the large-scale coherent structures and the underlying turbulent fluctuations. 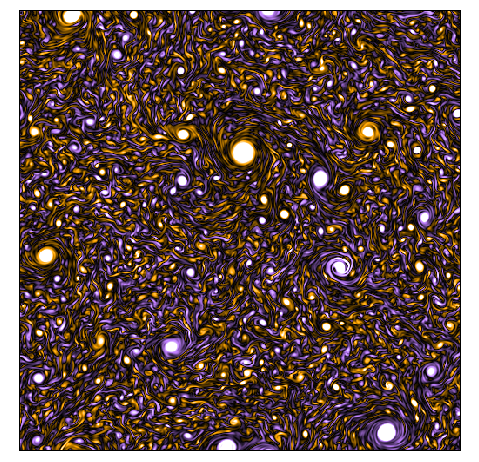 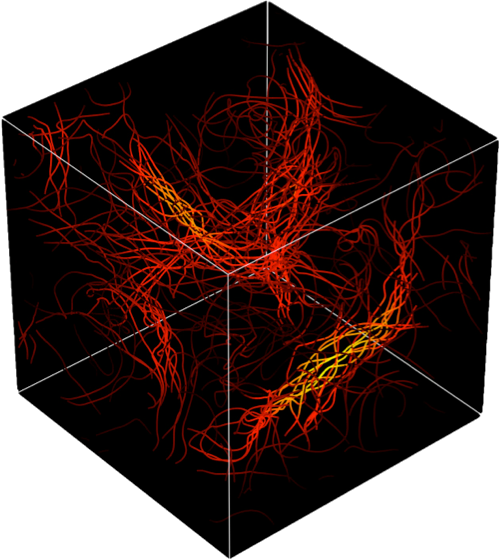 Quantum Turbulence
Quantum turbulence is the study of chaotic fluid motion within quantum fluids and gases such as superfluid liquid helium-4 or Bose-Einstein condensates. In these systems, due to quantum mechanical effects, vortices are defined through topological defects in the fluid density and are all identical in size (of the order of 1Å) and strength. It is the fact that all vortices are the same that leads scientists to think that through understanding quantum turbulence dynamics could help progress in understanding classical turbulence - a billion dollar problem in industry. My interests are numerous, but include the investigation of the quasi-classical nature of coarse-grained quantum turbulence and the role of helical Kelvin waves on quantum vortex lines.